Tune is a black music note with white eyes.He also used to wear headphone with the letter m in it. In episode 13 when he turned evil, he has red eyes with red headphone with a skull in it which possessed him

Tune is shown to be friendly and easy-going, implying he gets along well with other contestants and making friends often. Sometimes, however, Tune get annoyed and can be quite stubborn. Despite his good music taste, he is still a kind and considerate person. When Tune turns evil, he become cruel, cold and manipulative.

Tune makes his first appearance as a recommended character competing to join the show. When Calculator begins to play the music for the contest. Tune finds the song ridiculous and replies in a rather unpleasant way - "Are you kidding me?" At the end of the challenge when it is revealed that Tune was one of the characters that won the musical chairs challenge and got to join the competition, he is overjoyed and jumps up in happiness.

Tune was assigned Team captain of the new team - Tunes Untuned. He started off by choosing Cupcake calling her "so cute". Later he decided to choose Dice because while praising her intelligence. Finally, he also chose Sharpener. The rest of the team members of the Tunes Untuned were decided by Calculator. During the challenge, Tune gets frustrated at Sharpener for shouting out ridiculous answers.

Tune is first seen sitting on the grass, watching Toast and Ice Cream play catch using Bouncy Ball. After some time, Tune is ordered by Toast to chase a running piece of candy. Tune does not question this and does what he is told. When Toast makes a plan to capture the candy he is assigned to create a trap. After Toast calls out the mission W.A.G.T.T.T.C.T.R.C.F.T.S.S.C.E.I, Tune asks what the acronym W.A.G.T.T.T.C.T.R.C.F.T.S.S.C.E.I stood for, but he just gets interrupted by Toast. Later, Tune finds a trap for the candy and calls Bouncy Ball over. Bouncy Ball tells Tune to cover the hole with leaves (which he does). At elimination Tune is revealed to be safe with only 34 votes and is crushed by a giant stone statue of Calculator, thus killing him. He is then revived by a freezer along with Cupcake, Notebook, and Dice. Due to him lasting in the freezer too long his whole body (including his eyelids) is frozen. When choosing tools for the challenge Tune receives a pink dress which he doesn't use when the challenge starts. He was then shot by button and screamed sadly before he died.

Tune is seen with Dice and Cupcake when Jigsaw comes up to them. When Dice asks Jigsaw if Jigsaw would like to play with them, Tune doesn't say anything but doesn't appear to object against Jigsaw. After Ice Cream reccomends playing with Bouncy Ball and remebering how he was eliminated, Tune walks in with a green ball. Shortly after this, he slips on some of Toast's discarded ice cream and his headphones are broken. After a short scene between Mailbox and Toast, Jigsaw walks up to Tune and asks if he is okay. In a raspy voice, he says that he's fine, but then realizes that his voice sounds different. He panics slightly, saying that he sounds horrible, then notices that his headphones are broken. He then starts crying, only to be interrupted by a cough. Cupcake then says that his headphone must have been what gave him his vocoded voice. She then states "Without your headphones, you just sound like...like...an elephant." Tune tells Cupcake that he needs a new pair of headphones, and that Headphones, one of the reccomended characters from Episode 7, was the one who gave him his old pair of headphones and that he might have another pair. After the elimination theme, he is seen on the moon with the rest of the contestants. In this episode, there was no audience vote. Instead, the eliminated contestants voted. The only eliminated contestant who votes for him is Pencil Sharpener, so Tune is safe. After the elimination, the contestants are sent back to Earth, where Calculator announces that there are no more teams. Right after this, Tune is sent into a coughing fit and presumably either dies or passes out. Either way, he is left like this for the rest of the episode.

Cupcake brings him headphones that turn out to be evil headphones. Mailbox says he wants to try them on like Cupcake and she says yes, but before he has a chance to put them on, Tune insists that he wear the headphones, so Mailbox doesn't get to wear them after all. Tune puts on the skull headphones, & turns into Evil Tune. Later, he destroys Calculator's cake.

During the challenge, he tells Cupcake to shut up since she was panting a lot while running. He later was hit by a chainsaw and placed 3rd in the challenge.

He didn't get any lines in the episode. Since he was the most behaved at the Candy Emporium, he won immunity, and he avoided being up for elimination.There Was No Elimination For Real. 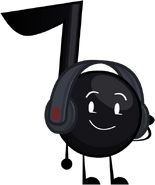 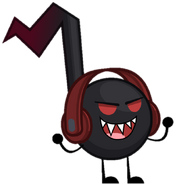 Tune's pose in season 1
Add a photo to this gallery

Retrieved from "https://objectmayhem.fandom.com/wiki/Tune?oldid=11860"
Community content is available under CC-BY-SA unless otherwise noted.