Toast, labeled The Candy Enthusiast or The Crazy One, is a female contestant in Object Mayhem. She is very hyper and is seen as an annoyance to the other contestants. She is very demanding to friends whenever she wants something and often goes to extreme measures to get it. She joined the game in Electrifying Beats after she won the 'Musical Electric Chairs' contest.

Toast appears to be a regular sized piece of bread. Her name suggests that she has been toasted, although there is a Burnt Toast body that could be found in the official Object Mayhem Character Bodies File. Her crusts are brown, and the main bread is a light brown with dark brown blotches.

In Chickens Can't Fly , Toast was shown to be a very energetic and consequently annoying character. When Calculator congratulates both Tune and Toast for joining the game, Toast dashes in and starts talking about random and pointless things. She eventually explodes after pointlessly chattering and exclaiming that she could explode from happiness. When teams were being chosen, the first person Toast chose was Burrito - calling him a "taco", "tortilla" and then later referring to him as a "donkey". After Tune chooses his second team member, Toast picks Ice-cream because she was "delicious". She then chases after Ice-cream, who is terrified. When it's Toast next pick she chooses Tune. Although her request was declined due to Tune being the captain of the opposite team. In her stupidity she then decides to choose Burrito (who was already on her team) calling him a taco once again. Burrito rages at her then she (again) calls him a donkey. Calculator decides he had enough and just chooses the rest of the teams himself. Toast decides on the team name - "Dancing Candles" for her team.

In Hit and Miss, Toast is first shown playing catch with Ice Cream using Bouncy Ball. When Bouncy Ball commands Toast to put him down, she replies with a weird face while saying: "NOPE!" and continues. Bouncy Ball then informs her that he was in possession of a candy given to him by Jigsaw. Surprisingly Toast is stunned by the candy. She then expresses he love of candy and Bouncy Ball notices this and gives Toast the candy. When Toast is in the region of eating the candy, it sprouts out legs and jogs away. Toast is angered by this and yells at the running to come back. She then orders Bouncy Ball, Tune and Ice Cream to pursue the candy which Ice Cream objects to but Toast screams at her to do it. Toast is then partially sighted running after the candy with others. Later a clock-wipe Toast is seen with Bouncy Ball, Tune and Ice Cream along with a chalkboard with a thought out strategy drawn out. Toast ascribes a task to everyone and gives Ice Cream the role of a cheerleader and throws pom poms at her. Toast then confirms that their mission/operation would be "W.A.G.T.T.T.C.T.R.C.F.T.S.S.C.E.I". Ice Cream complains about the mission name being too long and how she would not remember all the letters. Tune was joins in by asking what the letters stood for although is just bellowed at by Toast to "Just do it!".

Later in the Challenge,she ate Burrito and called him Delicious. As a result,Ice Cream was angry at her and says that she's Mental. She also called Cupcake delicious,and trying to eat her,she got Burned by Cupcake,who breathed Fire while Attacking. Her Team lost and was up for Elimination.

In "Drawn Together", she was in the bottom 2, and was safe, and said "That taco is more annoying than me!" She then was happy when Mailbox goes to her team, and her drawing was blank . Despite this, she told Calculator to use his imagination, and she got 100/100 for her team, making the Dancing Candles win. In the dream Calculator had, she flew, turned purple, had Jigsaw's pillow arm, and told Calculator to wake up.

In Cheese a Crowd, she asks what are they doing,which is a Chess Game with Button,and exclaimed. She also told Button that she has cool things in her House,and says that she has a House.

Near the end of the Challenge,she blamed Tune for causing the Pizzeria to explode and got set on Fire. Her,and other Contestants were put up for Elimination from the Contestants.

In A Space Odyssey, during the Elimination,Notebook voted for her for being Weird. She defends herself by saying that she is not weird,but says that she's weird,confusing Notebook. During the Challenge,she shot 2 Lasers on 2 Clouds,causing Ice Cream to say that she is supposed to shoot at someone,not the sky and Toast shot her. She shot Mailbox when he was laughing,causing her to win the challenge. She is told to select 3 People to be Up for Elimination. She chooses Mailbox first,but ignored that idea herself and selected Button,Ice Cream and Dice to be UFE because YOLO. Ice Cream says that she's her friend,but she does not care. After Calculator announces to vote for the 3 that were up for Elimination,she asks him why he always says Three instead of Tree.

In Just Keep Running, after Notebook flied out of the Ground,she was laughing on her Picture. Button asks her why is she laughing,but did not answer and kept laughing. She did not allow Button to see her Picture,even if he pleased her to see it. Later,she laughed at her Picture again. Ice Cream comes in and asks her if she can see her Picture,again,she says no and says that nobody likes her,and later,when Ice Cream turned to a Ninja,she was kicked,leaving her Picture on the Ground. Calculator sees her Picture,and asks them who did that Picture.She answers that she don't know and she found it near her House,but Calculator did not care.

In Tropical Overload, she was touching tune during elimination and standing around while playing monopoly. At Elimination, She was in the bottom 2 with Mailbox. After Calculator just forces the TV to show the votes, and Toast was eliminated with 1 vote more. (The closest voting in Object Mayhem History) And before she was hit by the bowling ball, Calculator said "Good-bye Toast, I'm sure no one will miss you!" then she got hit by the giant bowling ball. but then she had a chance to rejoin, but she failed, and some people say its because she didn't compete in the contest to rejoin, as she got eliminated on the same episode. 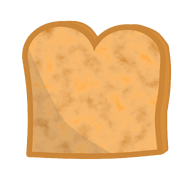 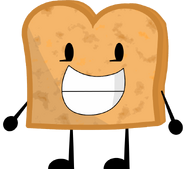 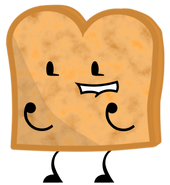 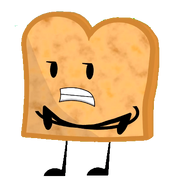 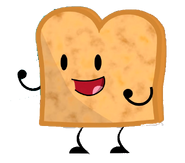 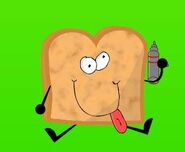 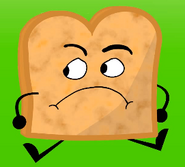 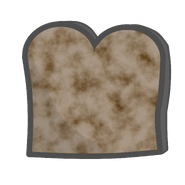 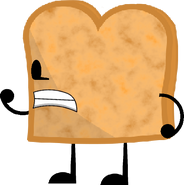 Add a photo to this gallery
Retrieved from "https://objectmayhem.fandom.com/wiki/Toast?oldid=11899"
Community content is available under CC-BY-SA unless otherwise noted.