Sharpener is a male contestant on Object Mayhem. He was originally a member of Team Fisher until the teams merged in the episode Chickens Can't Fly, so he is now part of Tunes Untuned.  He was eliminated in the episode Hit and Miss with 121 votes.

In Unusual But Good, Sharpener was one of the only characters that didn't appear in the episode but was mentioned. When the teams were being picked Phone asks Burrito if Sharpener and Jigsaw could join the team.

In "Find it!" Sharpener was first seen with his team. He states that what Burrito did to Button "wasn't nice". When Jigsaw expresses that Button was the only one on the team that didn't "have arms", Sharpener states self consciously that he didn't have arms either.

In Robot Frenzy, Sharpener is first seen with Dice standing on top of him while Calculator is announcing the challenge. Later he runs away from the red robots chasing him along with everyone else, while screaming.

In And Bingo was his name-o (Part 1& 2), when Mirror kills Ice Cream misguidedly, Sharpener comes up with a method to revive Ice Cream by inserting her into his freezer. Conversely the plan does not go as planned and Ice Cream ends up begin frozen.

When it is time for the challenge, Sharpener along with all the other remaining contestants are transported into a Bingo Room. When Calculator receives a phone call in the middle of the contest, Sharpener asks who the phone call was from. Sharpener ends up losing the Bingo challenge and was up for elimination.

In Electrifying Beats, Sharpener first appears in the start of the episode when Jigsaw requests to form an alliance with him. Sharpener awkwardly states that he was already allied with Phone. When Phone surprisingly comes into the scene and asks if what Sharpener said was true, he again awkwardly confirms this, to Jigsaw's dismay.

Before the elimination, Button walks towards Sharpener, Jigsaw and Phone and asks them to vote out Burrito. Sharpener is unsure about this and calls Burrito his friend when he is interrupted by Calculator who announces it was time for the elimination. At elimination, Sharpener votes for Lego for reasons not even Sharpener himself knows. Sharpener receives no votes at elimination and therefore obtains a doughnut from Calculator.

In Chickens Can't Fly, he was chosen onto Tune's Team, which Calculator named "Tunes Untuned". He forgot what he suggested for the contest in To be or not to be, and made several guesses until he correctly guessed a musical. This put the Tunes Untuned up for elimination.

In Hit and Miss, due to messing up so horribly in the challenge, he was booted out over Notebook in a 50-121 vote.

In Cheese a Crowd, he explains his disbelief on elimination just because he forgot what he suggested in Episode 4 to Mirror, who feels his pain.

In A Space Odyssey, he decides to vote for Jigsaw, but due to Jigsaw's new perfume, he changed his vote for Tune due to him being harsh to Sharpener in Chickens Can't Fly.

Sharpener and his team. 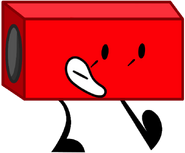 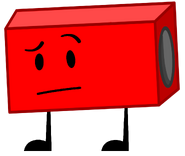 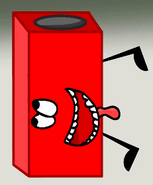 Sharpener gets hit by george.

Retrieved from "https://objectmayhem.fandom.com/wiki/Sharpener?oldid=11221"
Community content is available under CC-BY-SA unless otherwise noted.