Mirror, labeled The Pity Player, is a female contestant on Object Mayhem as a former member of Team Lucky. She was the first person eliminated from the show in Find it! with 30 votes, but she rejoined the game in Episode 15. She returned as a contestant in Season 2.

Mirror is shown to be very kind and caring. She is very friendly all the time

Mirror has a light brown frame which supports, of course, the shiny mirror in the middle. In space, her glass mirror appears in a dark blue color, although when on earth it has a light blue shading.

In the ending scene of Robot Frenzy, Mirror is seen lying flat down on the moon. She then wakes up and questions how he got there, seconds later being crushed by Donut.

And Bingo was her name-o

In the start of this episode, Gun seeks revenge on his team and therefore strangely flings Mirror into earth. Mirror then lands on Ice-cream, killing her, and then Mirror is broken.

After the credits, Mirror talks with Sharpener about why they were eliminated, not long before Notebook and Bouncy Ball land on the moon.

When Calculator arrives on the moon, Mirror questions why they were present. Mirror votes for Button, because Button is a pessimist.

Mirror rejoins the game in this episode. She starts to get in the car and goes to the Candy Emporium along with the other contestants doing it.

Mirror get's shattered due to Perfume's Scream, and remains dead for the rest of the episode. 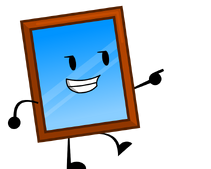 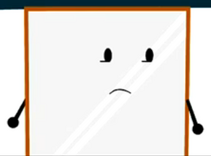 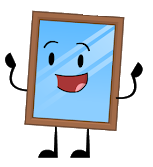 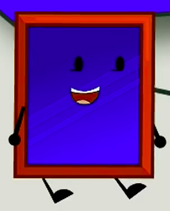 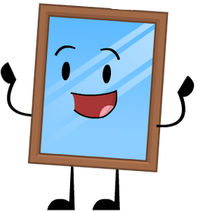 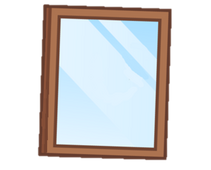 Retrieved from "https://objectmayhem.fandom.com/wiki/Mirror?oldid=11839"
Community content is available under CC-BY-SA unless otherwise noted.