Gun, Dice (one-sided), Ice Cream (one-sided on her side), Jigsaw

Lego, labeled The Likeable, is a male contestant competing on Object Mayhem. He was a member of Team Extravagant. In Electrifying Beats he lost the tie breaker between Burrito, therefore him being eliminated, he is known for being very nice and thinks 2 times before doing some actions.

He will be competing again in Season 2.

In Unusual But Good, Lego makes his first appearance when he asks Gun to be teammates with him. Gun refuses and somehow takes this as an insult leading to Lego getting violently kicked in slow motion. Cupcake then runs over to see what happened to Lego and then Lego states that Gun had kicked him. Cupcake lets Lego join her team and Lego thanks Cupcake for supporting him. Lego rec commends the name "Team Extravagant" when choosing team names.

In the second episode 'Find it!' Lego is first seen at the start watching TV. Cupcake walks in and asks what he was watching and Lego replies that the show he was watching was the American TV show "Friends" . Lego and Cupcake then end up watching and laughing together. In the challenge, Cupcake asks Lego to help her reach a golden coin on the top of a tree and Lego agrees replying with "Sure!". After getting the coin, it is taken from him by Gun. Lego angrily exclaims "Hey! We found it first!".

In Robot Frenzy, the episode starts of with Lego talking to Burrito and telling him how he found the place boring. After Jigsaw throws Burrito off the cliff, Lego states that it was "harsh". After the elimination theme is played, Lego is the only one (excluding Calculator) who liked it.

In To be or not to be, the scene opens up with Lego and Cupcake discussing about creating an alliance. Lego is excited about the alliance, however Cupcake is skeptical about the decision. Due to Cupcake'a repetition of the sentence "I don't know", Lego gets frustrated and walks away.

In And Bingo was his name-o, he got a bingo card that said "You are with bow", angering him. At the end of the episode he was looking at the moon, which turned purple, coloring his eyes purple.

In Electrifying Beats, a purple-eyed, slightly harsher Lego votes for Phone. Due to votes from Dice, Ice Cream, and Sharpener, Lego had to go through a tiebreaker with Burrito to survive elimination. Due to his failure at Darts and hitting the wrong red circle twice, he was eliminated.

In Chickens Can't Fly, he felt Phone's disbelief about elimination, and didn't want to talk about the twist that Calculator put in his elimination, being a Double Elimination. Gun greeted him, but Lego made fun of his hat.

In A Space Odyssey, during the elimination Lego made a hard choice and voted for Jigsaw due to her failure to make friends. He also apologized for this decision.

In Dice and the Candy Emporium, he is first seen in the rocket with Mirror, Donut, and Notebook inside. He was in the top two to be rejoining, but he didn't make it, as he didn't get enough votes. 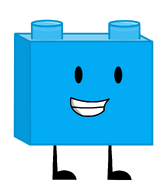 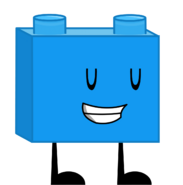 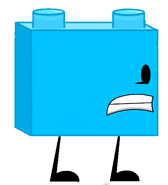 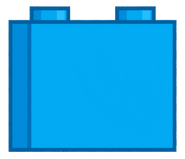 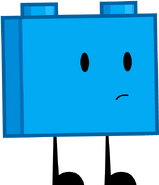 Add a photo to this gallery
Retrieved from "https://objectmayhem.fandom.com/wiki/Lego?oldid=11218"
Community content is available under CC-BY-SA unless otherwise noted.