Jigsaw, labeled The Loner, is a female contestant on Object Mayhem. She is a member of Team Fishers and later the Dancing Candles. She is currently competing in Season 2.

From episodes 1-6, Jigsaw appears as a puzzle piece with grass, a sky and a half sun as her picture. As of episode 7, she had a major redesign with a colorful green and blue design.

Jigsaw appears to be an outcast. She always attempts to be friends with anyone, but it always goes horribly wrong. Whether she's trying to socialize with Ice Cream and Toast and being rejected viciously, or trying to play a game with Button involving something provoking his fears, she is still a kind and gentle person. Apparently, the reason people dislike her is because of the way she smells. She fixes that in episode 12, only to be eliminated.

When the teams were being picked, Phone asks Burrito if Sharpener and Jigsaw could join the team and he accepts. Later in the episode, Jigsaw and Phone are both told to take the edges of the blocks. Jigsaw does not speak in this episode.

When Burrito violently kicks Button, Jigsaw agrees with Phone in saying it was mean to do so. She also exclaims that Button was the only team member that lacked arms, awkwardly leading to Sharpener stating he was armless too.

When Burrito furiously belts Button off a cliff, Jigsaw runs in and states that what Burrito had done was not nice. She then decides to give Burrito a taste of his own "medicine" by also throwing him off the cliff.

Jigsaw worriedly asks her team what they were going to do for the challenge, then Sharpener suggests Phone does something for them. After Team Fishers's performance, Jigsaw learns that Cupcake and Lego have agreed to form an alliance. She asks to join them, only to be rejected since she's on another team.

Burrito asks Jigsaw why they were following Team Gun during the elimination, to which she replies it was because they placed second in the challenge. At the elimination, it was revealed the second-placing team had to do one hundred pushups while the losing team did their elimination. Later, Jigsaw asks Calculator what the challenge is.

Jigsaw is seen trying to be friends with Bouncy Ball, Ice Cream, and Toast, but they all reject Jigsaw and don't care about her choices. She is then seen crying. At the elimination, she got the least amount of votes at 88. During the challenge, she drew a picture of Button and her becoming friends while he says that never even happened. After getting a zero, Jigsaw states she doesn't need a good rating or friends because she thinks she has loads of friends already.

Jigsaw puts on a perfume that doesn't smell like brussels sprouts, so everybody is nice to her.

At elimination, she is tied with Button for the most votes. Calculator decides to hold a tiebreaker where Jigsaw is eliminated. 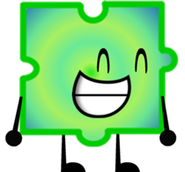 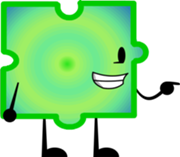 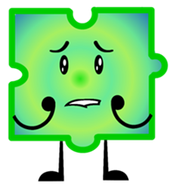 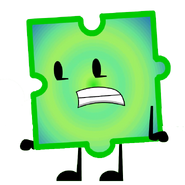 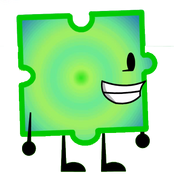 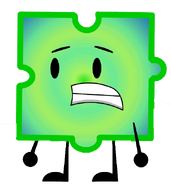 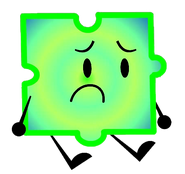 Jigsaw getting hit by Cupcake's taser 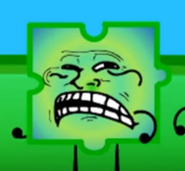 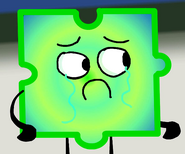 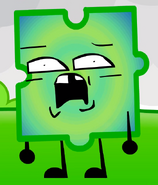 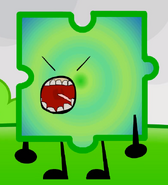 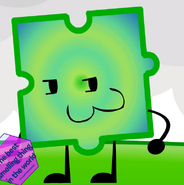 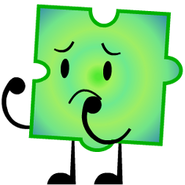 Jigsaw on the side of Phone 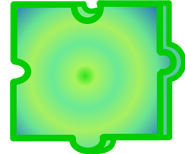 Add a photo to this gallery
Retrieved from "https://objectmayhem.fandom.com/wiki/Jigsaw?oldid=11746"
Community content is available under CC-BY-SA unless otherwise noted.