Thrill of the Hunt

Ice Cream, labelled The Cold One, was a female contestant on Object Mayhem. She was a member of Team Gun and Dancing Candles. She is currently competing in season Season 2 as a member of Four Leafed Forces.

Ice Cream's first appropriate appearance is when she gets asked by Camera to be on a team alongside with her. Ice Cream agrees but suggests that they get more people. Later in the episode, when Gun is struggling to lift a heavy block by himself for the challenge, Ice Cream questions Gun on whether he needed assistance or not. Gun replies in a rather unpleasant way. By the end of the episode, her team is up for elimination, and Ice Cream blames Gun for their loss.

At elimination, Ice Cream is safe with only 10 votes. She receives a "plain" doughnut as a prize for being safe and complains about its lack of sprinkles.

During the challenge (a game of tag), Ice Cream hides on top of a tree to avoid getting caught by the robots. Bouncy Ball asks her if he could hide alongside her and Ice Cream awkwardly agrees. As soon as Bouncy Ball enters the tree a robot appears and finds them, although Ice Cream manages to escape. Later, Ice Cream is noticed running away from a red robot (Roboty) and is then caught easily. She ends up being up for elimination.

When Gun greets both Ice Cream and Camera, Ice Cream responds by saying it's "going great". At elimination, Ice Cream is safe with the second-to-most amount of votes. In the course of thinking of something to do for the challenge, Ice Cream asks her team members if they could change the name of their team given that Gun was eliminated. Dice suggests "Team Lucky" and Ice Cream likes this selection. When it is time for performance, Ice Cream balances on top of all her team members. Her team ends up receiving 7/30, therefore up for elimination again.

At the beginning of the episode, Ice Cream states that it was sad that her team was up for elimination. Immediately after, she's killed by Gun throwing Mirror onto her from the moon. She's then recovered by Sharpener's freezer. At elimination, Ice Cream receives the most votes. However, she remains safe due to an aiming error with the bowling ball and Camera getting eliminated instead.

Ice Cream has no speaking lines in this episode. She ends up being up for elimination along with everyone else except for Cupcake.

While talking with Dice, Ice Cream says that she doesn't like Lego and that he was probably the "fan favourite", making him a threat. At elimination, both of them vote for Lego.

Ice Cream is chosen by Toast to join her team. When Toast calls her "delicious", she runs away in fear of being eaten. During the challenge, Ice Cream answers the first question: "What was the lowest amount of blocks stacked in episode 1 of Object Mayhem" with "zero; Team Gun stacked zero." She then answers the fifth question: "What was the first word that Ice Cream said in episode 5 of Object Mayhem?" with "the first word was... yeah!". Her team ends up winning.

Ice Cream briefly appears in Gun's story. Afterwards, she can be seen playing catch with Toast using Bouncy Ball. She is then ordered by Toast to help chase a running piece of candy, which she objects to at first. When Toast creates a plan to catch the candy, Ice Cream is assigned to cheer and is thrown two pom-poms. She later complains that her t-shirt is too tight, and struggles with the cheer.

Ice Cream and Toast agree to play catch using Bouncy Ball again. When Jigsaw comes to greet the three, Ice Cream tells her she's going to ruin their day. During elimination, she states that Calculator's run out of ideas, seeing that doughnut were the prizes again. She earns the second-to-least amount of votes. During the challenge, she tells Cupcake and Toast to draw something, stating she doesn't want to lose again. Her drawing ends up being a picture of her when she was little, which earns her 75/100 for her team.

Her only appearance in Calculator's dream is asking Toast why she's not drawing.

In an attempt to avoid playing Connect Four with Jigsaw, she decides to play Chess with Button. When the contestants are informed that they're the staff for the pizzeria, Ice cream replies with "Come again?". Later, she's told by Button to make a pizza cone with extra pizza cone on the side, and a chicken. She ends up being up for elimination along with everyone else.

After Cupcake asks what to do, Ice Cream suggests playing with Bouncy Ball again only to remember he's eliminated. On the moon, she appears happy to see him again. During the elimination, she gets no votes and is therefore safe. When she sights Toast shooting clouds during the challenge, she tells her that she's supposed to be shooting at targets and not the sky. Toast then shoots Ice Cream, eliminating her from the challenge. By the end of the episode, Ice Cream is chosen to be up for elimination by Toast. Ice Cream tries to convince Toast that they're friends but Toast states that she doesn't care.

At the beginning of the episode, Ice Cream finds multiple pennies and states that it must be her lucky day. Immediately after, a rocket falls on top of her, and Super Notebook comes in and attempts to "save" her by throwing a ribbon at her. During elimination, she exclaims "Are you serious?!" after Calculator reveals the prizes are donuts once again. She ends up receiving the second-to-most amount of votes. When Button is announced eliminated, Ice Cream tells him that he sucks at challenges anyways.

Later, Ice Cream asks Toast if she can see her picture, to which Toast declines and tells her nobody likes her. After telling her to take it back, she's suddenly seen wearing a ninja outfit and kicks Toast, causing her to drop the picture.

During the challenge, Ice Cream tells Mailbox to quit complaining and concentrate. She also wonders how Toast thinks it's fun, then soon gets a pie thrown at her. Nonetheless, she wins the challenge and wins immunity.

During elimination, Ice Cream is first to win the prize due to winning immunity, which is soon revealed to be a sleeping gas. After Tune is announced safe, Ice Cream starts dreaming, in which she makes barking noises and shakes rapidly.

Afterwards, Ice Cream wakes up on a tropical island and is later happy to be one of the five final contestants.

Ice Cream is seen with no ice cream in her cone for the first time. When Dice asks her what happened, she replies with "Gee, I don't know. It's a sunny day, I'm made of ice cream, do the math." Mailbox says he'll help her get her ice cream back 'fully out of kindness', to which Ice Cream sarcastically says that's not suspicious at all, and refers to him as "Lunchbox".

When in the car with the others, she has to sit in the trunk due to the car not having enough seats. She complains about the air conditioning not reaching her and the lack of windows.

When Mirror tells Mailbox "it's not about the votes, it's about morality!", she commented on how Mirror got out first even though he was nice, and how she's always had a personality.

Later, Ice Cream and Mailbox find an ice cream room and create an excuse to stay behind. She opens the door after the latter opened it the wrong way. Later, she tells him that he's lazy and just helping her to not get eliminated. After an explanation from Mailbox, Ice Cream apologizes, then tells him that he can't just give up because people are rude to him. After getting the ice cream, the two are later caught and are put up for elimination along with everyone else except for Tune.

Ice Cream can be first seen comforting Camera after remembering her experience on the moon. She warns Football about the mean ones getting out first after he kicks Jigsaw. When Perfume passes out, Ice Cream asks what happened. Later, Ice Cream is horrified at Cactus's request to 'touch him', then remarks that he's a cactus. When told he can't live without his spikes, she tells him she can't live if the temperature is over 32 degrees Fahrenheit. She supposedly dies immediately after finding out the thermometer she was holding uses celsius. Super Notebook then recovers her using a freezer.

During the first challenge, Ice Cream competes in round 1. She thanks Lego and Camera for cheering her one, only to fall off her treadmill and lose the challenge.

Thrill of the Hunt

Ice Cream is chosen to be on Shamrock's team, later known as the 4-Leaf Forces. When Cactus recommends the team name "The Cactus Crew", she recalls how it worked out for Gun.

During the challenge, Ice Cream asks if they should help Shamrock when he floats away. Later, she and Tune spot a cave that ends up holding two treasures. She's suddenly split in half by a now evil Tune and remains dead for the rest of the episode. 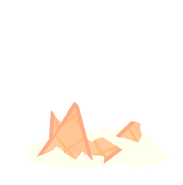 Retrieved from "https://objectmayhem.fandom.com/wiki/Ice_Cream?oldid=12805"
Community content is available under CC-BY-SA unless otherwise noted.