"Hit and Miss" is the ninth episode of Object Mayhem. The episode was written by UltraToons and BFDIDubita23. It was released on UltraToons' channel on May 10th, 2013.

The episode begins with Gun expressing his feeling with his very own story titled "Gun's Story". He describes how he was the captain of his team (Team Gun) while he was still a contestant on Object Mayhem and calls it "the best team ever". Gun then talks about his elimination from the show and blames it on his team members - because of this he seeks revenge. He admits to throwing Mirror into earth in episode 5 in order to kill Ice Cream, in addition to this he also acknowledges triggering the elimination bowling ball so that Camera would be kicked off the show in place of Ice Cream. Subsequently Gun purchases an wizard hat which he uses to hypnotize Lego, Bouncy Ball and Cupcake into voting Phone. Gun is then shown on the moon with a spaceship alongside him and with Phone 's battery in his hand which he uses to give power to his space ship. He then hypnotizes Donut and gives him orders to make Object Mayhem more interesting. Donut obeys and decides to create a "giant monster" which would "kill everybody". Camera is startled by this and goes in opposition to this idea. Donut does not listen to Camera and continues with the spell.

This article is a stub. You can help the Object Mayhem Wiki by expanding it.

Toast and Ice Cream are seen playing catch with Bouncy Ball and Tune is sitting down watching them. Bouncy Ball commands both Ice Cream and Toast to put him down although Toast declines and in addition to this says "NOPE!". Bouncy Ball is dissatisfied with this and tries to bribe Toast into putting him down by giving her a candy given to him by Jigsaw. Toast is stunned by this and straightaway falls in with this suggestion. When Toast receives the candy and is approaching eating, it sprouts legs and runs away. Toast orders Bouncy Ball, Tune and Ice Cream to chase the candy down. Ice Cream opposes to this and makes it clear that she`didn't want to take part but is forced by Toast who rages at her.

After a clock swipe, Toast is seen with Bouncy Ball, Tune and Ice Cream. Toast explains her plan and gives everyone a role expect Ice Cream in which she gives the position of a cheerleader. Toast throws a pair of pom poms at Ice Cream for the cheer. Subsequently Toast calls out the mission plan ("W. A. G. T. T. T. C. T. R. C. F. R. S. H. C. E. I"). Ice Cream again complains in relation to this and questions how she would remember all the letters said. Toast just bellows at her to do what he was instructed to that annoying thing.

Before the intro Sharpener and Burrito are farsighted on top of a cliff. Sharpener has a bungee jumping rope attached to him and asks Burrito if he was sure that what they were about to do would be safe and Burrito confidently replies to him saying that he was "100% positive" along with clarifying in what way the idea would work. Sharpener then asks Burrito to inform him why they were going to do it but Burrito ignores him and pushes him off the cliff. Sharpener falls far and in due course the rope snaps leading to Sharpener belting into the water.

Before the elimination Tune dashes into a field then calls for Bouncy Ball and tells him that the hole "would be a nice trap". Bouncy Ball agrees to this and tells Tune that they should cover the hole with some leaves. After Tune does this, Bouncy Ball calls for Toast and states that both him and Tune were finished with the trap, he also asks how Toast was doing with her part of the plan. Toast replies that she isn't done and how Ice Cream was still trying to learn "cheerography". Ice Cream, at that moment, requests to change her cheerleaders t-shirt and refers to it as "too tight", one way or another making her appear "ridiculous". Toast again shouts at her and makes it clear that she did not care then instructs Ice Cream to recite the cheer in which Ice Cream does but in a wrong way which gets Toast angered. Toast explains how there was only three T's in the mission in a rude manner. Bouncy Ball then calls for Toast again and she walks over and asks what he wanted. Bouncy Ball put in plain words that the trap setup did not work and then the candy is seen on top of the trap but fails to fall. The candy then sprouts wings this time and flies away. Toast is irritated by the fact that the candy was there at that point and Bouncy Ball did not inform her. Bouncy Ball is the transported to the elimination area by a green powdery smoke. Toast satirically says "Great".

After two hours of the dead contestants being in the freezer (Cupcake,Dice ,Tune and Notebook) Ice Cream then admits that she had made a mistake and that the contestants were supposed to only be in the freezer for two minutes. Dice is happy to be alive but is trembling from cold at the same time - Jigsaw questions how this is possible. Notebook after that shivers from the cold and says "It's so-so-sooo c-c-c-cold!". Ice Cream tries to console Notebook by saying she went through the same thing. Tune also trembles and utters about how his eyelids were frozen. Cupcake is the only one that is happy among the three other frozen contestants and talks about how she appeared like a frozen yogurt. 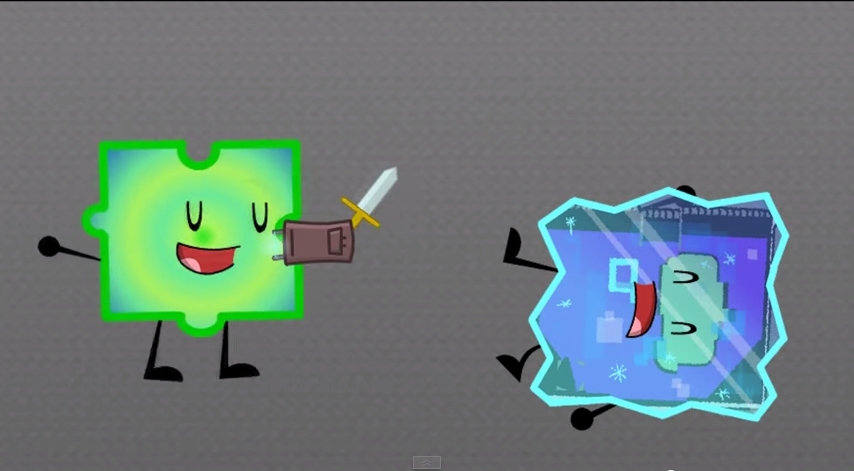 Calculator explains the challenge and everyone is just strangely transported into the battle room with no explanation. Button questions how they reached the battle room but Calculator ignores him and continues explaining saying that if all members on a team were killed the challenge would be over and the opposite team would win. Burrito throws away the pink teddy bear he got as a tool for the challenge, referring to it as "useless". Everyone then charges at each other, Notebook gets killed by Jigsaw with her sword then is soon after electrocuted by Cupcake's teaser and blows up. Burrito runs over to Cupcake as asks her if she had any last words before he would kill her with his giant hammer. Cupcake states that her final words would be "Cupcake for president!" then changes it multiple times.

Burrito gradually gets angry and tells her to shut up, next thing Toast eats Burrito and calls him delicious. Ice Cream is shocked by this and states that Toast was "mental". Dice is then shown and is worried about hurting someone, Bouncy Ball bounces into the scene and agrees with Dice. The number 4 then falls beside Bouncy Ball and then he is  crushed by a sledge hammer. Tune is seen running with his eyes shut, he is then shot by Button with a laser gun and therefore dies. Button feels bad for killing Tune so he shoots himself. Calculator then announces that it was a "2 vs 2 brawl" left but Dice then gives up, defeating that purpose. Cupcake then karate kicks Ice Cream and kills her. When it is only Cupcake and Toast left, Toast states that Cupcake looked delicious. Both Cupcake and Toast jump up in order to kill each other and Cupcake uses her fire burp to kill Toast, burning her to death. Since Toast lost for her team The Dancing Candles were up for elimination.

Retrieved from "https://objectmayhem.fandom.com/wiki/Hit_and_Miss?oldid=11368"
Community content is available under CC-BY-SA unless otherwise noted.