Headphones, labeled The Frenemy is a recommended character. He was the second booted out of the debut competition, and is the one who got Tune's headphones. Later, in episode 12, Headphones decided to be evil and try to win Object Mayhem, then, that's how Tune got evil. As a result, he is most likely a significant antagonist of Object Mayhem, but it also the only indirect antagonist of the show.

Headphones is a pair of headphones. 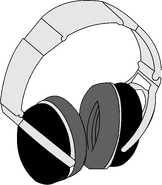 Add a photo to this gallery
Retrieved from "https://objectmayhem.fandom.com/wiki/Headphones?oldid=11074"
Community content is available under CC-BY-SA unless otherwise noted.