Cupcake, labelled The Sweetener, is a female contestant on Object Mayhem. She is a member of Team Extravagant, and Tunes Untuned.

Cupcake appears with a brown body, along with pink icing for her head. On her icing is a few big, white sprinkles (now colorful topping). On top of her head is one big cherry.

Cupcake is an overall friendly character who is almost never rude to anyone. Cupcake is shown to be very innocent too, although she works hard in almost all challenges.

In Unusual But Good, Cupcake was first seen besides Notebook when Bouncy Ball was asking if she could be on their team. During the episode, she encourages Lego to be on her team after he was badly injured by Gun. Also, when picking team names, she suggested the name 'Team sprinkles', but a different name was used instead.

At the start of "Find it!", Cupcake walks in from the side of the screen to ask Lego what he was doing. When Lego tells her what he was doing (watching Friends), she asks to watch it too and Lego agrees. They both watch and laugh. During the challenge, she finds the golden coin required to win in a tree and asks Lego to help her get to it. When they had successfully reached it, Gun snatches it away from them. After the challenge is over and Calculator announces that her team lost, she sadly shouts "NOOOOO!".

In Robot Frenzy, Calculator says that it was time to start the elimination, but Cupcake complains that it's too early. Later, when Donut is eliminated, she states that it isn't fair and he didn't deserve to be eliminated. She comforts Donut before and after he's eliminated.

In episode 4 "To Be or not to be" at the start, Cupcake is seen having a conversation with Lego. Lego asks her to form an alliance with him, but she's unsure and thinks that she would be letting her friends down. Lego asks her why she keeps saying "I don't know", and she then again replies "I don't know".

During the challenge, Cupcake suggests that the team do Snow White And The Seven Dwarfs for the talent show, but Notebook has a different idea in mind. Cupcake argues with Notebook about this choice. While performing for the talent show, Cupcake tells the story about Snow White And The Seven Dwarfs, but is continuously interrupted by Notebook who talks about "Evil Killer Doll". Later in the episode, Jigsaw asks Cupcake and Lego to be in an alliance with them, but Cupcake denies due to Jigsaw being on the opponent team.

Cupcake is transported to the "Bingo Room" along with everyone else for the challenge. Cupcake plays the challenge throughout the episode, and at the end, she shouts out "BINGOOOOO", therefore, she won the challenge and immunity for the next episode. At the end of the episode, Cupcake is seen looking up at the moon with Bouncy Ball and Lego. She notices how the moon is so bright and tells Lego. In the end of the scene, the moon turns purple along with Cupcake's eyes.

In this episode, Cupcake has purple eyes due to her getting hypnotized in the previous episode. Lego, Bouncy Ball and Cupcake all vote for Phone prior to Gun's plan. Later in the episode, the spell wears off and Cupcake returns back to normal. When Lego is doing the tie-breaker with Phone, when Lego's only hope is to hit the red target, she gives him moral support, telling him that they'd always be friends forever, even though Lego still ends up losing the challenge.

Cupcake was chosen to be on Tunes Untuned because Tune thought she was "super cute". During the questionnaire challenge when Calculator asks the contestants to sing the elimination song, Cupcake wishes that Lego was there and states that he knew the song perfectly.

At elimination, Cupcake is safe with 36 votes and is crushed by a giant statue. During the "EPIC DEATH BATTLE", when Jigsaw stabs Notebook and kills him, Cupcake kills Jigsaw with her taser. Burrito then runs over to Cupcake and asks her if she had any last words. She at first states that her final words would be "Cupcake for President" then changes it multiple times. By the end of the challenge when it is Cupcake vs Toast, Toast calls her delicious and Cupcake dares Toast to eat her. Both Cupcake and Toast charge at each other and she kills Toast by burping out fire.

During the process of the challenge, Cupcake is seen sitting on a chair (while the rest of her team are drawing) quivering with anxiety. When Ice Cream asks her why she was not drawing, she responds by saying that she wanted to draw, but a "Weird Green Ball" kept staring at her. Later, Cupcake announces to Calculator that she had completely finished her picture.

When it was Judging time, Cupcake shows Calculator her drawing which is strangely censored. Calculator dislikes the picture as it has "Too much sprinkles, too much kittens, too much pink" and gives it a 20/100. Calculator also throws up afterwards. Cupcake ends up being up for elimination along with the rest of her team. 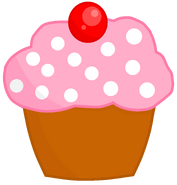 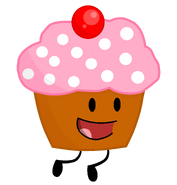 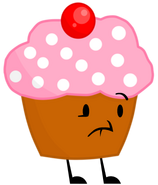 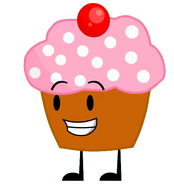 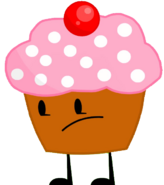 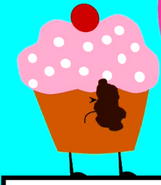 "Already? But we just got here!"

Cupcake glares at Lego (So does Donut)

Cupcake asks Lego what happened to him 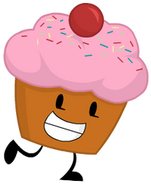 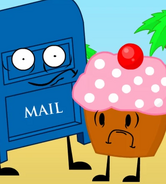 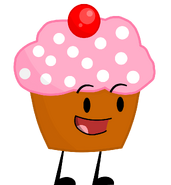 Retrieved from "https://objectmayhem.fandom.com/wiki/Cupcake?oldid=14303"
Community content is available under CC-BY-SA unless otherwise noted.