Camera, labeled The Snapshot, is a contestant on Object Mayhem. She is on Team Gun (Renamed "Team Lucky" in To be or not to be). She was eliminated in Episode 5, even though it was supposed to be Ice Cream, because Gun corrupted the Bowling Ball.

She is currently a contestant in season two.

Camera is first seen asking Ice cream to join her team. Her team consists of Gun, Dice, Ice Cream, and Mirror. Gun suggests and forces the team name to be "Team Gun". During the challenge, Camera complains to Gun that he isn't doing anything and is going to make them lose the challenge. Afterwards apparently is shot at by Gun.

Camera is safe at elimination with 9 votes and gets what appears to be a cinnamon flavored donut. This is the only time in the episode when Camera does any interaction.

Camera is seen being a goofball in the background during the explanation of the challenge. Since 2 people on Team Gun were caught, they were up for elimination. Camera then says "Ahh really? We are up for Elimination AGAIN?"

When Gun says "Can't I be nice to you guys for once?" Camera replies "Not really" and is immediately told to shut up by Gun which causes Ice Cream to be sent flying. In the elimination, Camera is safe with only 7 votes against her and receives a snail as a prize. Before Gun is hit by the bowling ball, he states that he will get revenge on his team. When Team Fishers is thinking of an idea, Camera can be seen flying in the background. Team Gun then renames themselves to Team Lucky. For their presentation, Team Lucky makes a body pillar. However, they lose the challenge with a score of 7/30. 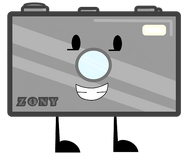 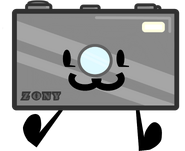 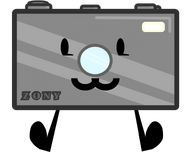 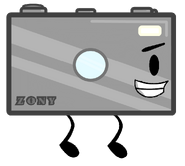 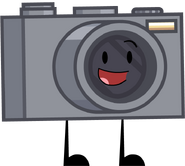 Retrieved from "https://objectmayhem.fandom.com/wiki/Camera?oldid=11837"
Community content is available under CC-BY-SA unless otherwise noted.