Button, labelled The Victim, is a male contestant on Object Mayhem. He was a member of Team Fishers until the merge in episode 8 when he then became a member of Dancing Candles. Button is known for being a vast whiner, generally towards Burrito which results in him getting pugnaciously bullied.

In Unusual But Good, Button makes his first appearance (briefly) at the start when Calculator is greeting the contestants and welcoming them. When it was time to pick the teams Button asked Burrito if he could be on his team and Burrito kindly accepted him. When Burrito is assigning everyone what to do for the challenge, he leaves out Button and Button replies angrily saying that he was left out.

In Find it! , Button doesn't really do much. He insults Burrito about his plan leading to Burrito painfully kicking him into the air. Later when he's walking he comes across the coin needed for the challenge and wins for his team.

In Robot Frenzy, Button is first seen standing at the edge of a cliff looking down, next thing we know Burrito comes up and taps him, Button says hello to him trying to be nice but Burrito kicks him off the cliff and Button falls down the cliff, screaming loudly.

In To be or not to be, Button isn't seen throughout the episode until the end after the credits where he is seen with Burrito. Burrito tells him that they've been falling for a month and Button replies saying that it gave him the time to finish a hard puzzle. Burrito accuses him saying it's his fault that they fell off the cliff but Button denies this saying that it's actually Burrito's fault. After they both fall into the water but Button sinks while Burrito floats to the top.

In the fifth episode - And Bingo was his name-o (Part 1) - Button is first sighted with Burrito underwater due to the event from the previous episodes. They then both come out of the water. When Calculator says that Bingo would be played differently to the original type Button complains saying he wanted to play the original version, Burrito kicks him as a result of this. When Calculator says that it would be contestant vote and not viewers vote Button is overjoyed.

In Electrifying Beats, before the intro Button walks up to Phone, Jigsaw and Sharpener and asks them to vote out Burrito which they all agree on (except Sharpener at the time). When it is down to Button in the elimination on who to vote for he decides to vote for Phone in order to give Burrito a second chance. During the tie-breaker challenge Lego accidentally hits Button with the dart twice. After the tie-breaker challenge Button shoots Burrito with a laser as revenge.

Button joins the new team formed in this episode named the Dancing Candles. At the end of the challenge in Chicken's Can't Fly, Button answered the winning question leading his team to victory.

In Hit and Miss, When choosing a tool to use in the second part of the challenge, Button receives a laser gun. After everyone chooses a tool, Button along with the other contestants are unusually transported into the battle room with no explanation and Button questions this but is ignored by Calculator who continues explaining the challenge. During the challenge when Tune is aimlessly running, Button shoots him, killing Tune. Afterwards, Button feels guilty for killing Tune and therefore shoots himself.

At elimination, Button only receives 44 votes and is safe. When Burrito is eliminated Button is overjoyed and shouts out "YES!" along with Ice Cream, Toast and Jigsaw. When it is time for Calculator to judge Button's drawing, Button hands up a half-done picture and complains about not having enough time to finish it due to him having no arms and having to result to drawing with his feet. He receives a half score of 50/100. After the credits in the random ending scene, Button orders Cupcake and Toast to help him and claims that a coconut was eating his leg. It is then revealed that his leg had turned into a sausage.

Button first appears at the start of this episode randomly sitting on the grass when Jigsaw runs in and asks him to play Connect Four with her. Button rudely declines to exclaim "NO!". When Ice Cream says she had to play Chess with Button, he gets angry, refusing to play. During the challenge Button tells Ice Cream to make a "Pizza Cone", later instructing Mailbox to cook a chicken.

Button fell for Mailbox's remote prank, and found it funny, but not as funny as his next trick: A Robotic Mailbox that said "Hey everyone, this is Mailbox, the biggest idiot on this show!", which Mailbox didn't find funny. Due to being a pessimist, changing his vote in Electrifying Beats, and the events of Find it!, he got votes from Mirror, Phone, and Burrito, respectively. Button was saved from elimination in a tiebreaker when Calculator pulled out Jigsaw's name from a bowl. When Dice first shot a laser towards Mailbox, it missed and hit Button. Toast, the winner, decided to put Button, along with Dice and Ice Cream, up for elimination.

Button is first seen asking to look at Toast's picture, although Toast shouted: "Go away!" At the elimination Button got a record of 271 votes, eliminating him. 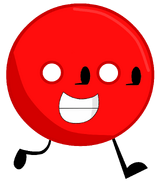 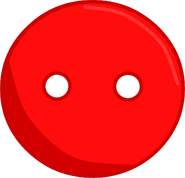 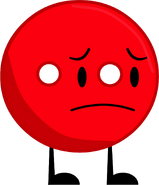 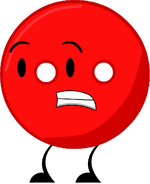 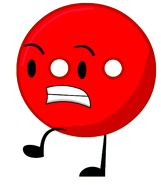 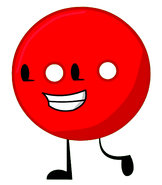 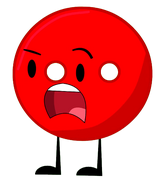 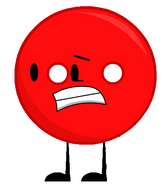 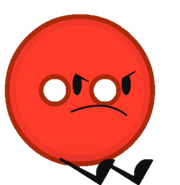 Button in Wanna be friends? 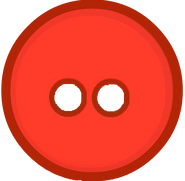 Retrieved from "https://objectmayhem.fandom.com/wiki/Button?oldid=12784"
Community content is available under CC-BY-SA unless otherwise noted.