Burrito, labeled The Taco, is a male contestant in Object Mayhem. During the first few episodes, he was on Team Fishers, and later on, the Dancing Candles. He tends to be a victim of Toast's jokes, as she often calls him either a "donkey" or a "tortilla" or a "taco" repeatedly, which causes him to get extremely angry. He also enjoys bullying Button, mainly physically. In Drawn Together, he was eliminated with 145 votes and sent to the moon.

From episodes 1-4, Burrito is shown to be a wrapped, beige colored Burrito. As of episode 5, he is first seen under the water alongside Button. He is shown to have gone through a minor restyling, the top of him shows lettuce and tomatoes added to him.

In the first episode Burrito was shown to be a very generous and gentle character. When choosing teams he allows Phone along with Sharpener and Jigsaw join his team. He states that Phone was his "best friend". Even so he lets Button join his team too although he is shown to hate him in later episodes. However, when Mirror asks to be part of the team, Burrito declines due to the fact that there was a limit of five associates per team. During the challenge Burrito comes up with a proficient strategy. He gives everyone a part to do in the challenge although leaves out Button due to him being armless, he instead asks Button to give the team motivation.

In the course of the challenge, Burrito informs his team members that he had come up with a new strategy to win the challenge but then is straightaway cut in on by Button who accuses him of being "bossy" and always leaving him out. Burrito insults Button by calling him "dumb" and armless. Enraged Burrito kicks Button and a crash is then heard. He then expresses to his team that Button was holding them back. Everyone else on the team disagrees with this.

At the start of the episode Burrito is seen talking with Lego on top of a cliff. Lego complains about how boring the show was. Burrito doesn't get what Lego tries to stress therefore asks him what he intended. When Lego replies that there was "nothing to do around here" and that he was getting "tired of it", Burrito suggests they do something fun. Although Burrito's proposal of "Fun" varies from Lego's. Burrito walks up to the edge of the cliff where Button is seen gazing to the left. Burrito taps him tenderly then immediately boots Button off the cliff. Burrito finds this hilarious but ends up getting thrown off the cliff by Jigsaw who is maddened by what Burrito had done.

Burrito is not seen in this episode much until the end (after the credits). This is due to the fact that he was thrown off a cliff in the previous episode along with Button. In the concluding scene, Burrito and Button are seen still falling since the last month. Burrito accuses Button for the incident happening. Seconds later, both Burrito and Button land into water. Button sinks, while Burrito floats back up.

Burrito is first seen in this episode underwater with Button. Burrito tries to swim to the top while Button just drifts away. When Burrito reaches the surface his is happy to be back on land. When walking to the elimination area, Burrito asks Jigsaw why they were following team Gun (now Team Lucky). Jigsaw replies saying that it was because in the previous episode they came second in the challenge but is then interrupted by Calculator who says that they had to do one hundred push ups while he started the elimination. In the Bingo room when Button complains about playing the "original bingo", Burrito kicks him to keep him quiet. When choosing cards for the challenge, Burrito picks the sixth card. When Notebook fails at getting the next letter Calculator calls out, he is mocked by Burrito exclaims "Ha ha!".

At elimination, Jigsaw votes for Burrito to be eliminated and he is shocked by this and shouts out "What?!". Phone also votes for Burrito which makes him really frustrated, leading him to shouting out "Stop voting for me!" and then votes Button. When Button has to choose who to vote out, he saves Burrito and gives him a second chance. When Burrito is competing against Lego in the tie-breaker, he wins meaning Lego gets eliminated.

When choosing teams, Toast picks Burrito and refers to him as a taco. Burrito is angered by this and informs Toast that he was in-fact a Burrito. Later Toast again picks Burrito and again refers him to a taco, which gets Burrito frustrated leading to him yelling at Toast who still didn't seem to understand.

He was going to kill Cupcake, and asked for her last words. Due to Cupcake continuing to change it, it gave Toast time to eat him, causing him to fail the contest.

He was eliminated over Toast in a nerveracking 145-124 vote.

Burrito obviously voted for Button. Button compared Burrito to Gun, angering him, because Burrito is aware of Gun's personality. 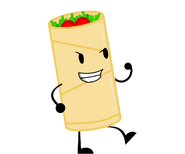 Toast about to eat Burrito while Cupcake is thinking about her last word.

Jigsaw and Phone is about to vote Burrito.

Delete this meme
Add a photo to this gallery
Retrieved from "https://objectmayhem.fandom.com/wiki/Burrito?oldid=11639"
Community content is available under CC-BY-SA unless otherwise noted.