Biscuit is a female judge on Object Mayhem. She has appeared in the episodes To be or not to be and Cheese a Crowd. Biscuit was recommended and voiced by BFDIDubita23.

In season 1, Biscuit was rude, stubborn, and impatient. If she didn't get her way she would get angry and demanding.

In season 2, She is a lot more shy and less brat like. She is no longer her mean spiteful self, and is now a shy and confused character.

Biscuit gives Team Extravagant a score of 3/10 because she assumed it was too confusing for her. When Team Fishers finish their performance, Biscuit calls it ridiculous but admits that she enjoyed the music, giving it a final score of 6/10. When it is Team Lucky's turn for a final performance, she again call this performance ridiculous and gives it a 0/10. 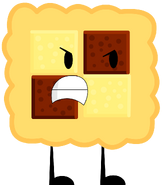 Add a photo to this gallery
Retrieved from "https://objectmayhem.fandom.com/wiki/Biscuit?oldid=11163"
Community content is available under CC-BY-SA unless otherwise noted.